Tetebatu is the oldest tourism village  in the  eastern part of Lombok Islands, Indonesia. And at the same time as the pioneer of tourism v...

Tetebatu is the oldest tourism village in the  eastern part of Lombok Islands, Indonesia. And at the same time as the pioneer of tourism villages in the eastern of Indonesia. Tetebatu has mystical waterfalls, have vast rice fields, and have a very spectacular view of the Mountain, this is a scenic rural area located in 700m above sea level, and 15 kilometers linear distance south from the summit of Mount Rinjani. Here the world is still orderly, slowly more and more visitors are coming to Tetebatu.

And now Tetebatu is a favorite destination visited by many tourists, both local and foreign, behind its charm, Tetebatu has a unique history in its development. 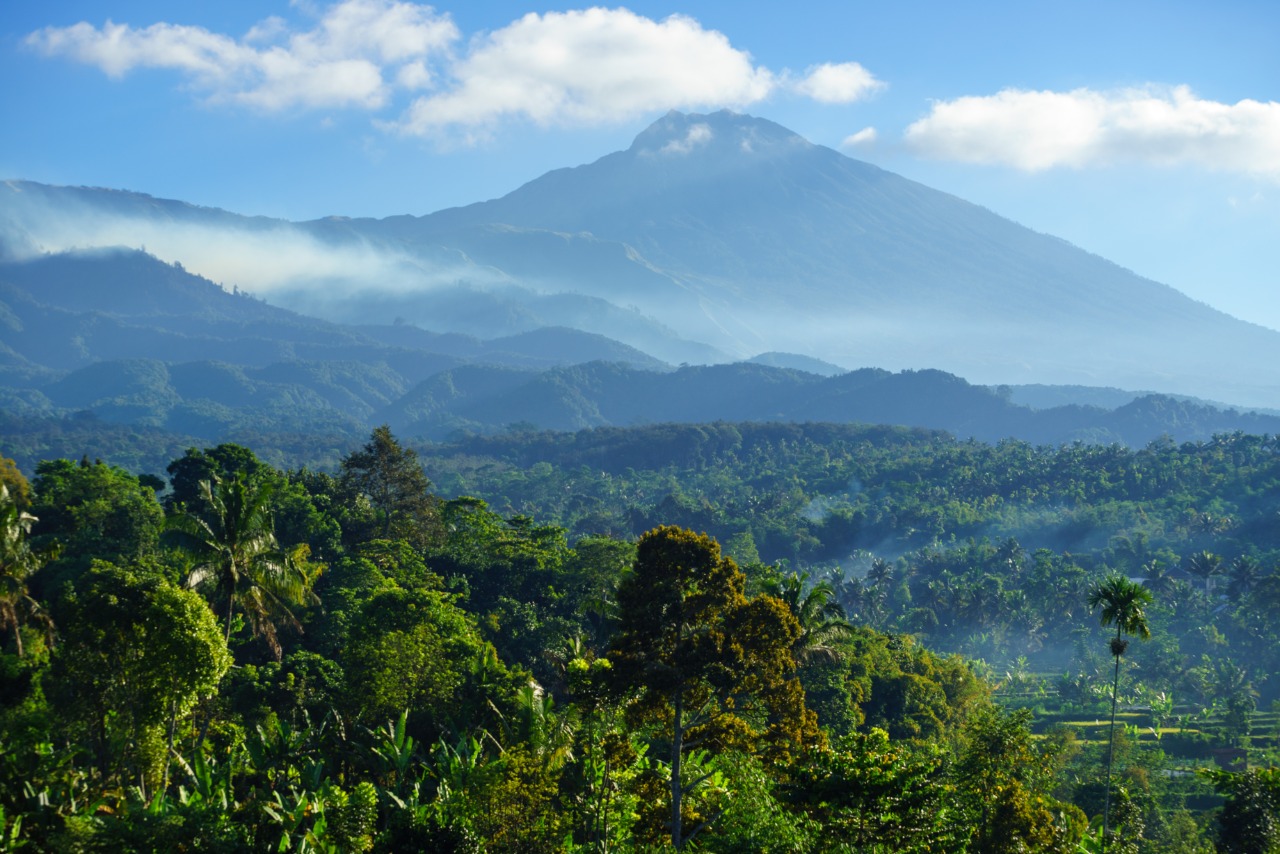 Starting from "Pembangger Suranadi" a descendant of Prabu Anom from Loyok, who traveled from the east end to the west end, then he found a very high cliff and there was no road, so Prabu Anom and his entourage decided to build a road, when the road was finished.  it turns out that on the cliff there is a rock, so that's where it was originally called Tetebatu, where Tete means bridge and Batu means stone. 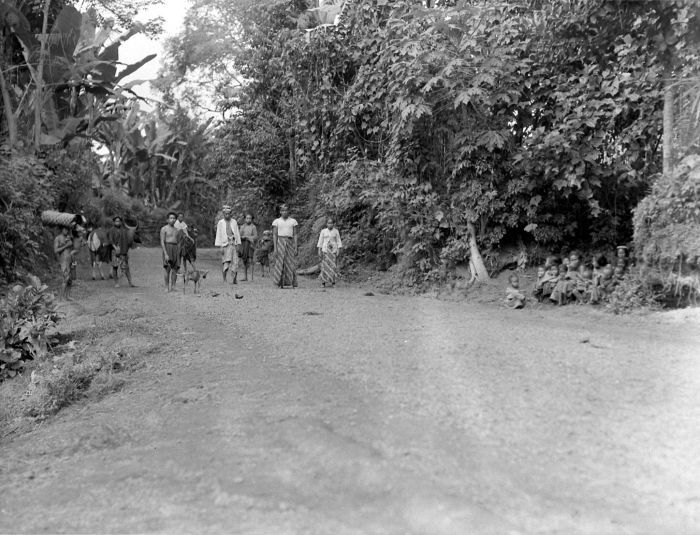 The person who first lived in Tetebatu was named Mbik Miran (Alm.) and from him there were only seven heads of families, until now there are more than 7129 people.  Initially Tetebatu was incorporated in the village of Kotaraja, but along with its development there was an expansion so that Tetebatu became a village, and the first village head was H. Nasibullah (late) from Lingkung hamlet.

In 1913 a doctor came from Malang, East Java and he was named Raden Soedjono, after that he settled and built a Residence in Tetebatu which is now known as Wisma Soedjono.  The initial purpose of doctor R. Soedjono's arrival to Tetebatu was to treat the disease outbreak that was engulfing the community at that time.

Because of the charming natural beauty of Tetebatu, Dr. R. Soedjono invited his colleagues from the Netherlands to enjoy the natural atmosphere of Tetebatu and from there, Tetebatu Tourism was known and named the oldest tourist village in Lombok, until now it is a natural tourist destination and lodge still growing, such as Wisma Soedjono, Pondok Tetebatu, Surya Mandalika, Vanilla Garden and many more.
The majority of the work of the Tetebatu community is farming, raising livestock and gardening, which is why the beautiful rows of rice fields are pleasing to the eye. Not only that, Tetebatu also has a very diverse culture and local wisdom for food security or agriculture which of course has its own uniqueness.  usually perform several stages of the ritual, that is:

1. Nyelametang Pengmpel is a ritual that is often carried out by the people of Tetebatu before cultivating the fields with the aim that water remains abundant even in the dry season.  Nyelametang Pengmpel is often carried out by the community once a year when the Rowot Star ( The Kartika Latitude Cluster on the eastern horizon at dawn ) is tilted from below, then traditional elders will invite subak children or people who use water to perform rituals or thanksgiving so that the water remains smooth and not disturbed by spirits.

2. Nanjek Nao ( Nyenyawek ) is a custom of the Tetebatu community which is believed to prevent rice plants from being disturbed by pests and spirits.  The initial process of nyenyawek, the community first looks for young and old Arenga pinnata (Enau) fronds and then prepares other materials such as areca nut, betel leaf, lime, pepesu , which is then chewed and then sprayed on the media that has been made from Arengapinnata midrib, after all the process is done the community then takes the media to the rice fields to be Sawek, usually this media is placed in the corner of the rice field which has a highland.

3. Rantok (Bgegendong) is a long mortar used for big party traditional events.  Which is used to pound rice into rice and cooked at the event.  The pounding of rice is not done haphazardly, but by using techniques that will create a distinctive rhythm as the entertainment of the people who participate in the Party Event.

In addition, Tetebatu also has a traditional ritual, namely the "Bubur Putek" ritual.
Bubur Putek is a traditional hereditary ritual native to the village of Tetebatu which is held every year, to be exact every 15th of the month of Muharram in the Hijriah year, initially the traditional leader will see the rowot star cluster & the tenggele star, he will count and map it, after these two stars are seen then  the customary leader can determine that the month has entered and rituals will be performed. 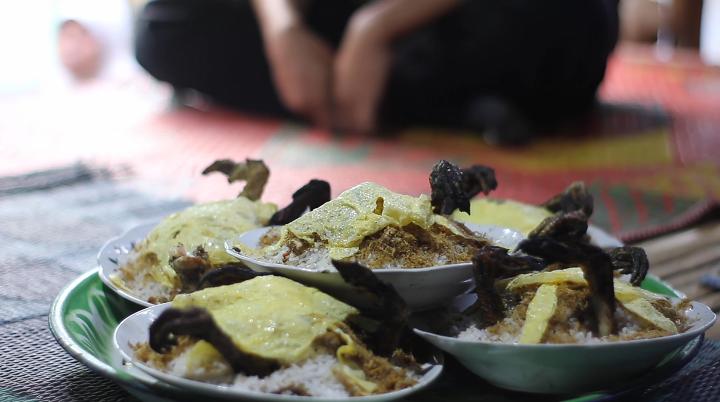 The initial process of this Bubur Putek, residents will flock to collect materials such as wood, coconut, spices, etc., then the traditional leaders will gather and deliberation to choose: Pekasih, Pembanger, Kiyai, pemangku, dan Maliq that is 4 girls who are under 13 years old or have not menstruated and 4 women who are elderly, after all have reached an agreement with their respective duties, the traditional leader will change the scarf (headband) into a white scarf then one of the heirlooms in Bale Maliq  (custom house) will be taken out and brought with rice which will be washed to Lingsar spring then spices and all ingredients can be mixed.

After the morning prayer, Bubur Putek is ready or It's ripe, and Maliq will taste it first after Maliq finishes eating, Bubur Putek may be distributed to the community according to custom and completed by the ustadz "by doing remembrance and praying for the village to prosper.  given peace and tranquility, security is kept away from disaster
and before sunrise all traditional processes have been completed.

Thing To Do In Tetebatu 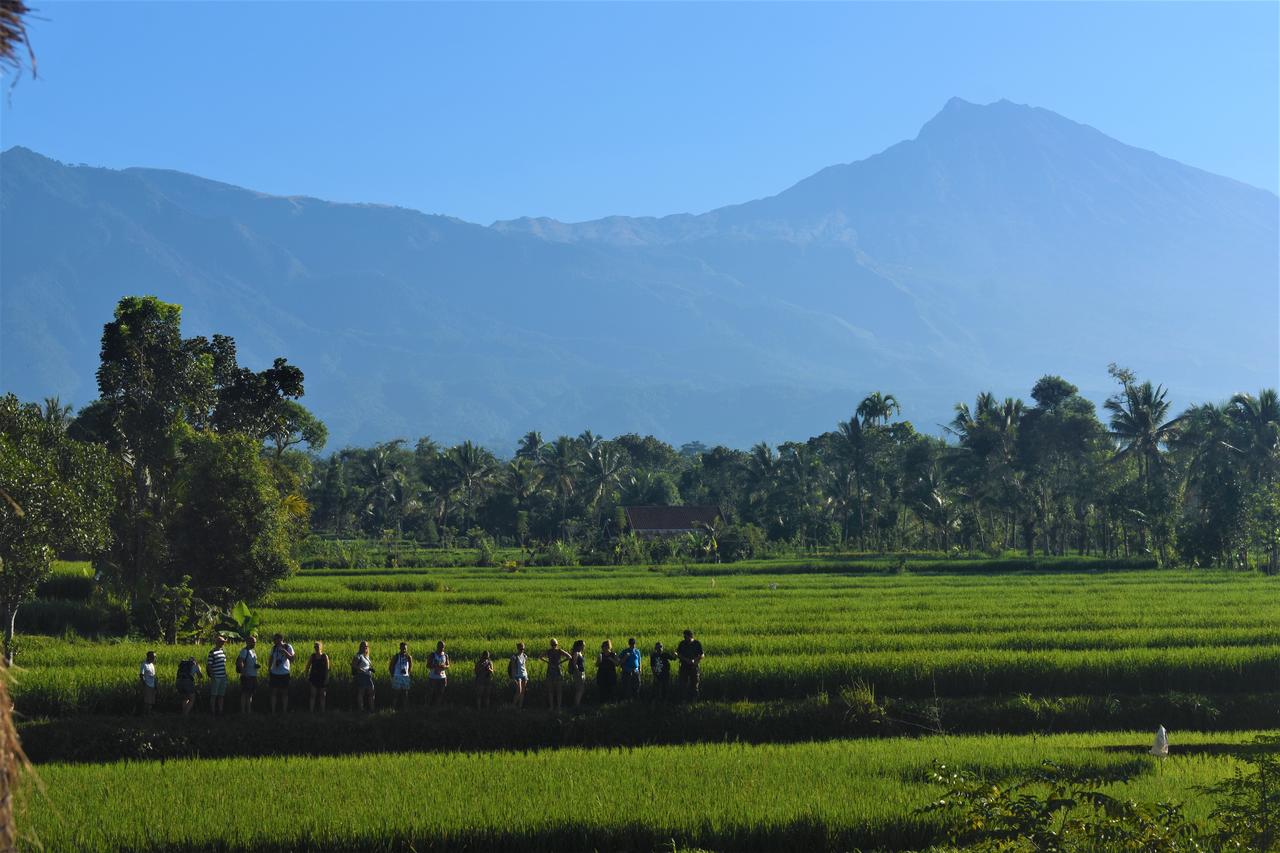 Wake up early at your hotel after breakfast, and explore all the natural beauty of Tetebatu at sunrise.  You will see the morning sun shining on the misty green rice fields and pearl-like drops of water on each rice grass with Mount Rinjani in the background.

You are free to stop or take pictures at any terrain and meet the locals working in their rice fields or plantations.  Even though you won't be speaking the same language, you will feel warmth, love, and happiness in their smile. 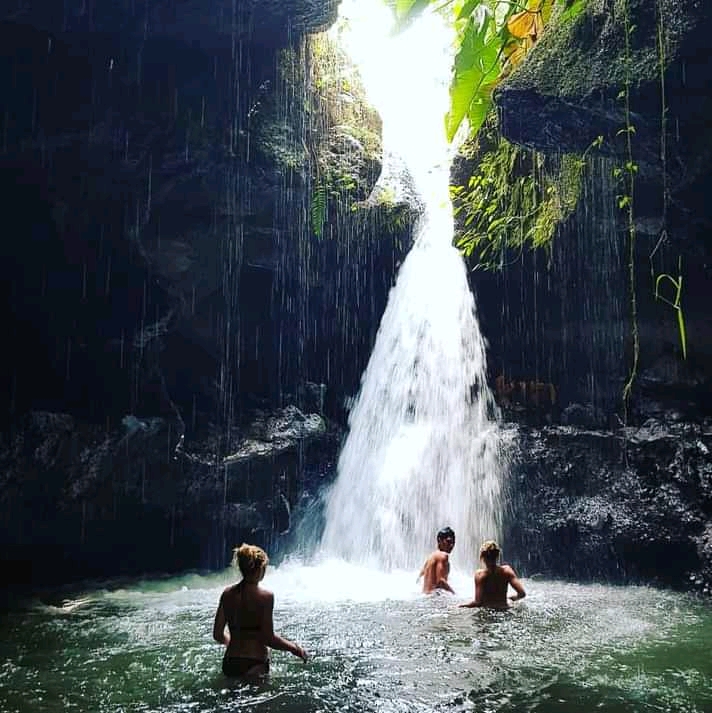 Tetebatu waterfall is a dreamy place. You will walk through the rice field, a tunnel filled with water, cross the water through a manmade bamboo bridge and finally swim in a waterfall directly flowing from Mount Rinjani. If you arrive here in the late morning (around 10), you will see the sunlight passing through thick vegetation and falling on waterfall – a spectacular, shimmering sight to behold. Tetebatu Monkey Forest is a thick forest and home for grey macaques and black langur. Well, if you wanna say hello to monkeys (without touching), go to the monkey forest!
4 kilometers north of the village centre, the peaceful forest is the ideal place to see grey macaques as well as Lombok’s ‘rarer and more beautiful’ black monkeys. Visit with a guide for the best chances to see monkeys in the canopy.

4. Trek to Mount Rinjani via the Tetebatu route 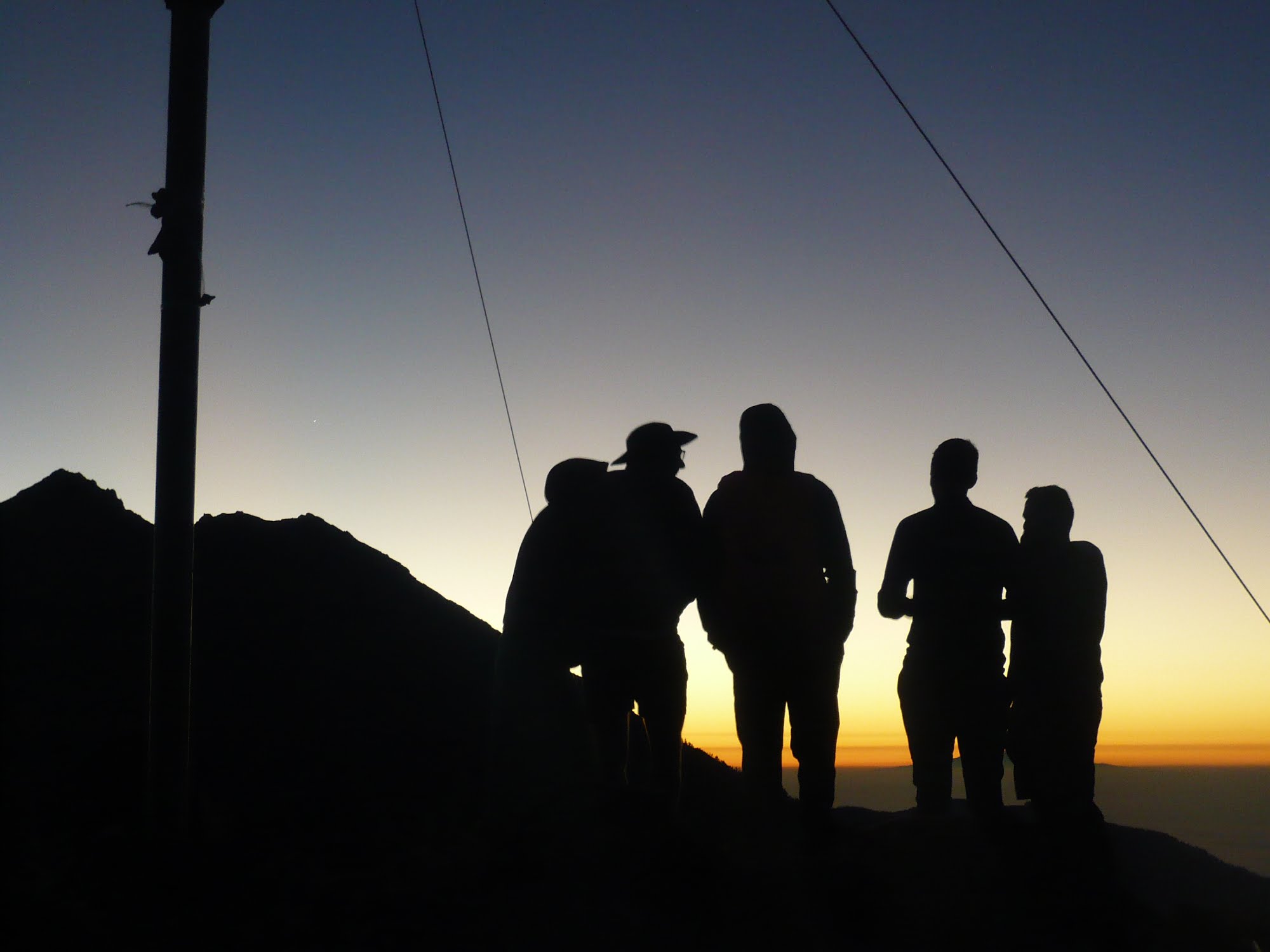 From Tetebatu you can also do trekking to Mount Rinjani (the second highest volcano in Indonesia).  The Tetebatu route passes through dense forest which makes it different from other routes (Senaru and Sembalun).

This trail is not very well explored as you can only do trekking up to the crater rim of Mount Rinjani and cannot reach its peak (unlike the Senaru or Sembalun trails).  Since the post-earthquake of 2018, trekking to the peak is officially closed from all routes, you can trek to Rinjani via the Tetebatu route. 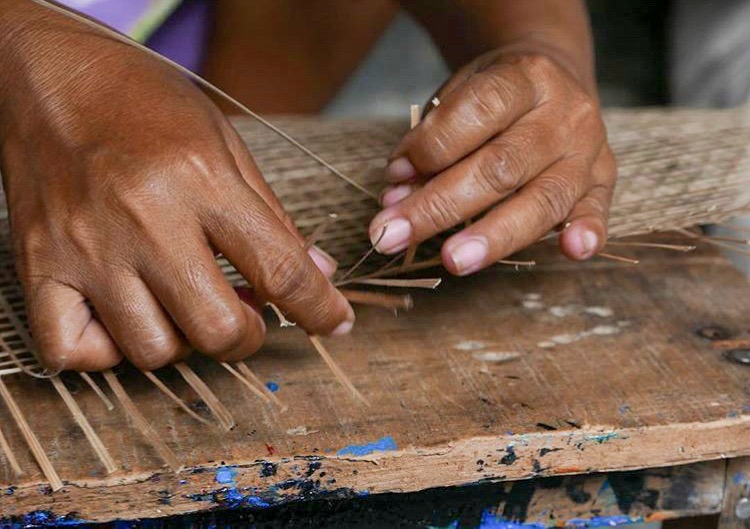 If you want to explore the cultural side of Lombok, go for a handicraft tour in Tetebatu and other nearby villages. These villages are known for an authentic Sasak cultural experience and are also a hub of traditional handicraft artisans.

Loyok village, only 30 minutes away from Tetebatu, is a hub for bamboo handicrafts. You can learn the entire process of bamboo braiding from the locals here.

7. Make your Sarong at Pringgasela village 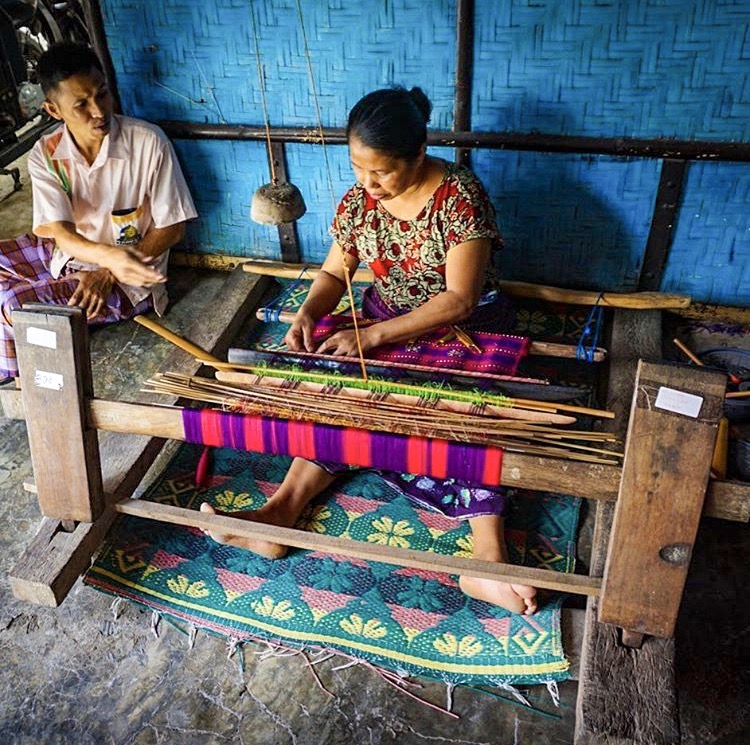 In Pringgasela village, they say a girl must know to weave and she should weave at least a piece of fabric for her future husband as a symbol of love. If you want to know more about weaving the beautiful sarongs with traditional bamboo tools, head to the Pringgasela village.

There are many other things to do in Tetebatu like – Sasak stick fighting in Kotaraja village, coffee making, pottery, etc. Choose the activities depending upon your interest and time.
Also, if possible make some purchases from these traditional artists or give some tips out of courtesy because this is one way of earning their livelihood.

How to get to Tetebatu

Local transportation in Lombok is not yet developed so there are not many bus options in Lombok.  Taxis will be the best alternative for hopping between cities/villages in Lombok.

If you reach Lombok via flight, you can get a Grab Taxi (order via app) at the airport.  In Lombok you will find Grab taxis only at the airport and not in other parts of Lombok.  You must connect with a local taxi operator to order a taxi.  But if you want to visit Tetebatu and need a pick up, we can arrange it for you, we will pick you up wherever you arrive around the island of Lombok.

Do not hesitage to give us a call. We are an expert team and we are happy to talk to you.

We have worked with the largest travel companies in Indonesia and abroad, and have been trusted to handle dozens of clients to tour with us.